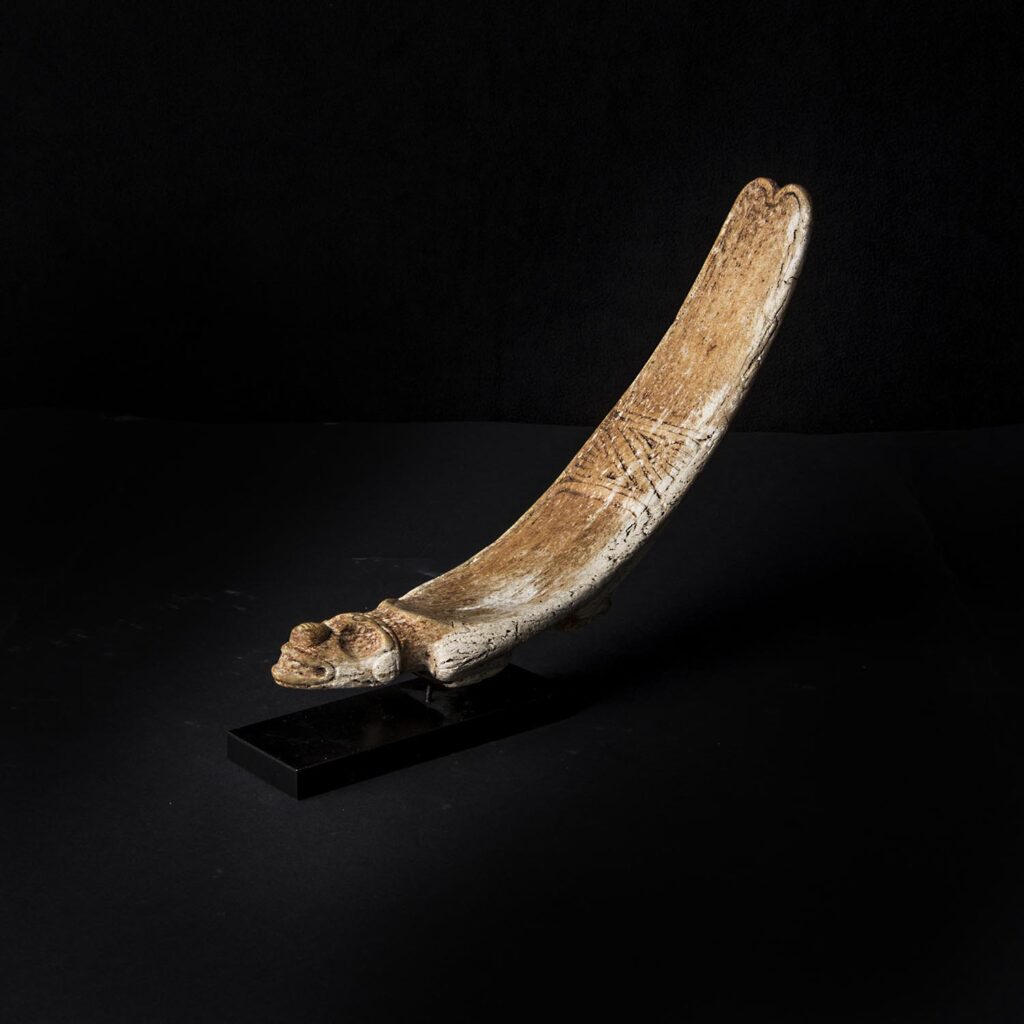 DESCRIPTION/EXPERTISE
At first glimpse this object could easily be classified as a Spatula Vomitivo, better known as the Vomit Spatula, a tool made and used for religious purpose by the Taíno people.

The Spatula was used for purification as part of the Cohoba snuffing ceremony. In this ritual the shamans (“Behiques”) of the Taíno inhaled the seeds of the cohobana tree, by use of a pipe, to produce a psychedelic effect in purpose to communicate with deities. The shamans used the Spatula prior to this, by inserting the object into the throat, resulting in vomiting, as the purification of the body was thought to intensify the drugs effect.
Although many Pre-Columbian cultures used purging as a cleansing practice, the Vomit Spatula appears to be a unique Taíno tool.

This object has a remarkable difference though with most Vomit Spatulae, as the base is provided by four legs, which reminds of the Taíno ritual seats, better known as “Duho”. These larger sized seats were used by the shamans to lay on, probably in a fetal position, while inhaling the Cohoba. Consisting with the Taíno tendency toward cemi miniturization, Duho were also made in miniature size, which is comparable to the size of Spatulae. It’s difficult to determine if this object was seen as a Spatula or rather a miniature version of a Duho, in that case probably used to hold important, religious relics. The narrowness of the base, rather indicates a Spatula, in which case it probably had more value than practical use, but the fact that the width of the base doesn’t get more narrow towards the end, rather points to a miniature Duho. In any case the object had a direct association with the ceremony of Cohoba snuffing.

The object is made of manatee rib. Compared to other Amerindian Cultures, manatee bone is very prevalent in Taíno art, probably due to the fact that besides manatee there were no large animals on the islands, so the large sea creatures were probably one of the most important resources for meat and bone. Besides it’s accessibility, manatee bone is also soft, which makes it a pleasing medium to work with.