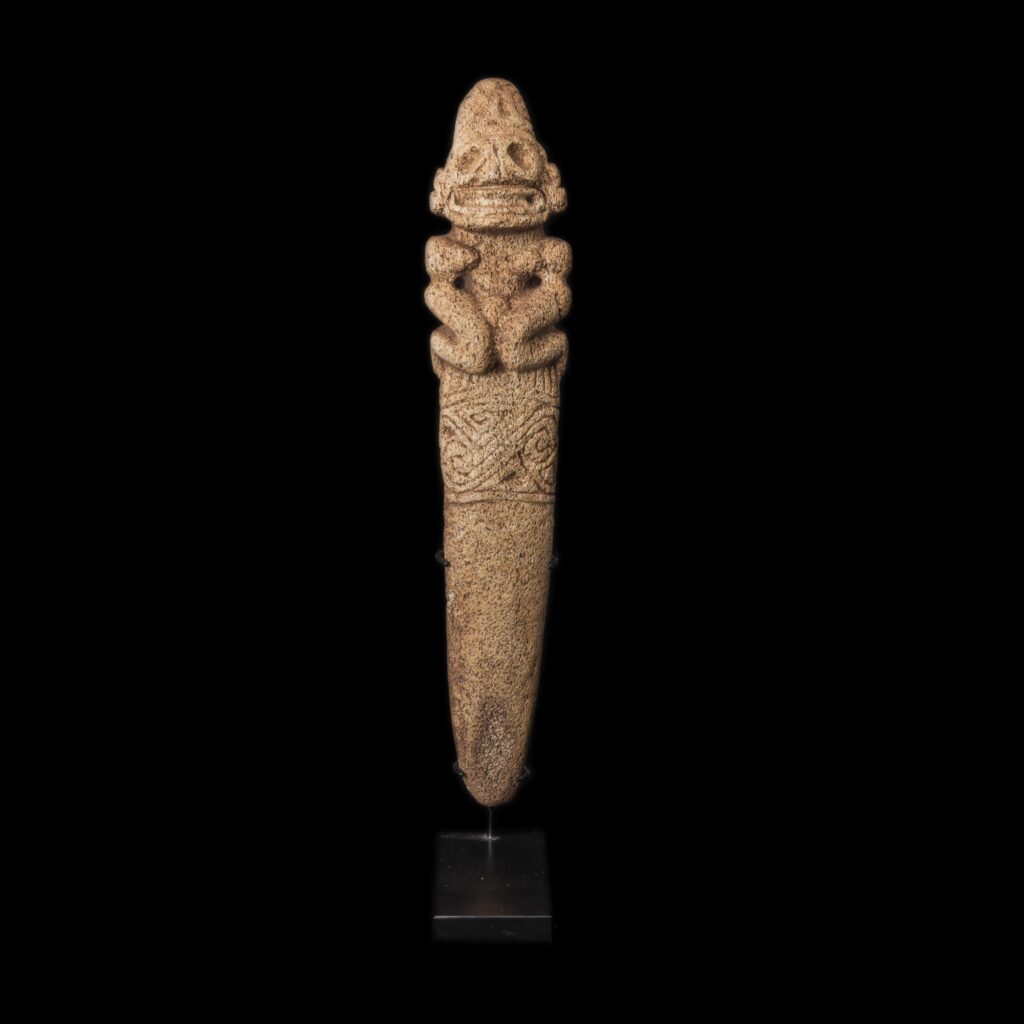 DESCRIPTION/EXPERTISE
The Spatula Vomitivo, better known as the Vomit Spatula, is a tool made and used for religious purpose by the Taíno people.

The spatula was used for purification as part of the Cohoba snuffing ceremony. In this ritual the shamans (“Behiques”) of the Taíno inhaled the seeds of the cohobana tree, by use of a pipe, to produce a psychedelic effect in purpose to communicate with deities. The shamans used the Spatula prior to this, by inserting the object into the throat, resulting in vomiting, as the purification of the body was thought to intensify the drugs effect.
Although many Pre-Columbian cultures used purging as a cleansing practice, the vomit spatula appears to be a unique Taíno tool.

On this particular Spatula the upper part of the shaft is characterized by typical “sigmoid” type symbols. The sigmoid is portrayed as two interlocking bird heads with swirl eyes and would most of the time refer to the goddess, Guabancex. This goddess, often identified as the male god Juracan, was known for it’s violant temper and was believed to control the weather, in particular hurricanes. Often depicted with a furious face and swirling arms, Guabancex/Juracan is recognizable in particular by the sigmoid type symbols, as the Taíno were aware of the spiraling wind patterns of the hurricanes.

Taíno Spatualae were often made from wood or shell, but in most cases they were carved from the rib of manatee. Compared to other Amerindian Cultures, manatee bone is very prevalent in Taíno art, probably due to the fact that besides manatee there were no large animals on the islands, so the large sea creatures were probably one of the most important resources for meat and bone. Besides it’s accessibility, manatee bone is also soft, which makes it a pleasing medium to work with.

F. Ramon Pané, An Account of the Antiquities of the Indians, Duke University Press, London, 1999, p. 29.