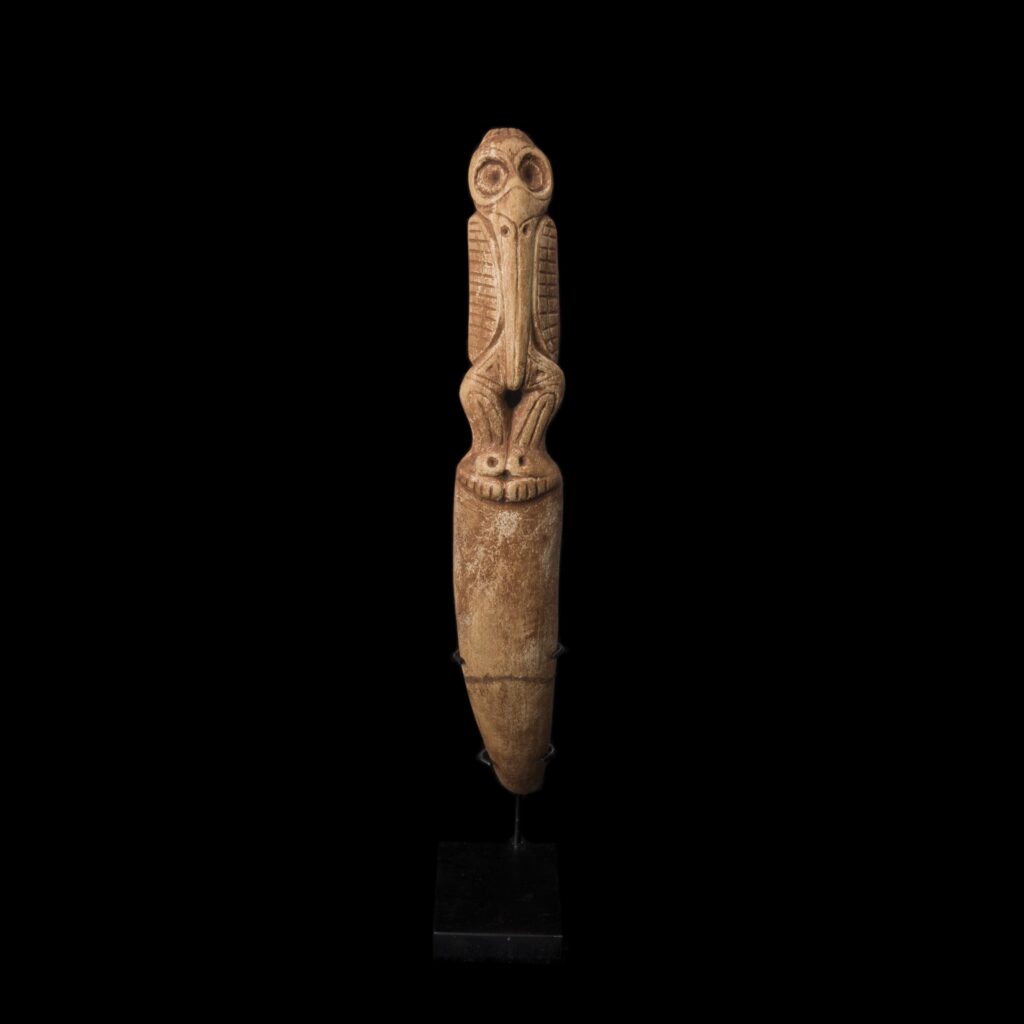 DESCRIPTION/EXPERTISE
The Spatula Vomitivo, better known as the Vomit Spatula, is a tool made and used for religious purpose by the Taíno people.

The Spatula was used for purification as part of the Cohoba snuffing ceremony. In this ritual the shamans (“Behiques”) of the Taino inhaled the seeds of the cohobana tree, by use of a pipe, to produce a psychedelic effect in purpose to communicate with deities. The shamans used the spatula prior to this, by inserting the object into the throat, resulting in vomitting, as the purification of the body was thought to intensify the drugs effect.
Although many Pre-Columbian cultures used purging as a cleansing practice, the vomit spatula appears to be a unique Taíno tool.

The end of the Spatula, held during insertion, was usually carved into a human or animal like cemi, and often a combination of the two. In this case however we can find a hidden animal duality, in which the pelican is obvious, while the coney (a rodent which was commonly hunted by Taino for nourishment) is rather concealed in the legs of the bird.
The Taíno believed animals possessed a profound knowledge of the supernatural cosmos and where consulted during Cohoba ceremonies to reveal their individual secrets. Pelicans may have been worshiped as fishing guides, since they tend to feed where fish congregate. Also their gracefulness, size and large sized bills must have seemed remarkable to local fishermen.

On the back of the pelican’s head we can distinguish an engraved quadrant symbol, which often refers to the four cardinal directions or the four sacred elements.

Taíno Spatualae were often made from wood or shell, but in most cases they were carved from the rib of manatee. Compared to other Amerindian cultures, manatee bone is very prevalent in Taíno art, probably due to the fact that besides manatee there were no large animals on the islands, so the large seacreatures were probably one of the most important resources for meat and bone. Besides it’s accessibility, manatee bone is also soft, which makes it a pleasing medium to work with.

EXPERTISE
Thoroughly examined and pronounced to be authentic by specialist in Taíno art, Larry Roberts, author of Taíno Sculpture: Art of the Gods, SBP Books, 2014.

CF: A similar spatula with a full portrayed pelican can be found in Muséo Pantéon la Caleta and has been published in John F. Scott, The Art of The Taino from the Dominican Republic, University presses of Florida, 1985, object 71.