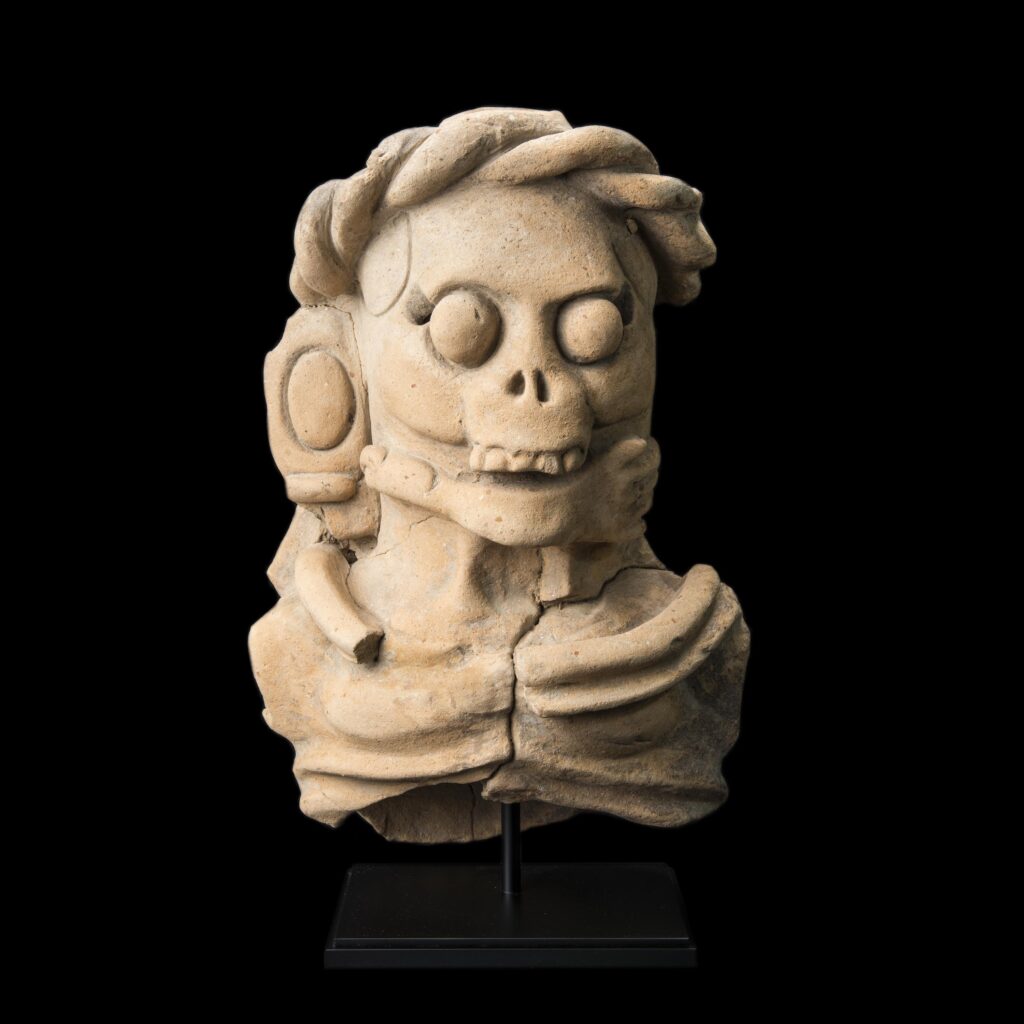 DESCRIPTION/EXPERTISE
This terracotta bust, with it’s skull-like features, contains more narrative than meets the eye. Not only is the sculpture a reference to one of the greatest achievements of the Mayan civilization, their numeral system, it is also an object used to communicate with deities and deceased, by nourishing them with smells. For the ancient Maya, the sense of smell was closely related to notions of the afterlife and they believed deities and deceased nutrified themselves by consuming smells of burned incense, which could be corn, resin of the copal tree or even human blood. Incense censers, just as this particular object, were used to burn these sort of organic materials.

The object has a couple of appliqués, attachments of shaped pieces of clay, added on to the surface. The eyes are probably secured separately, with the intention of leaving a small open area, so the smoke and smell could go through the eyes. Also the braided headpiece and the fragments of a necklace were fixed individually. That is probably why there is a part of the necklace missing, as frequently the appliqués got lost due to their method of application.

It is important to emphasize that most censers excavated were found in fragments as ceramic is very fragile, but they are also known to have been intentionally broken for ritual purposes. This object shows indeed signs that some parts, for sure around the neck and sternum, have been mended and reassembled again.

As already mentioned the object is a reference to the Mayan numeral system, which evolved around 300 A.D. In addition to having their own script, which was made of “glyphs” (Mayan hieroglyphs), the Maya had different ways of writing numbers. The most well-known system the Maya used to write numbers was the “bar-and-dot system”, which used three basic numerals to represent any possible number: a dot for one, a horizontal stripe for five and a conch shell for zero. Besides this system, the numbers 0 to 19 could also be represented by head or portrait variants, each having one or more diagnostic features that identify it, these are now known as “head-variant” or “portrait glyphs”.

The fact that these 20 portrait glyphs occur so rarely in inscriptions, in combination with their apparent irregularity of form, make it very difficult, and sometimes even impossible, to determine their corresponding numerical values.

This bust though refers without much doubt to probably the most important digit (as it allowed the Maya to develop a number system that could represent very large numbers), namely zero (0).

The Portrait glyph which depicts “Mih” (Mayan for zero) is always to be distinguished by a hand clasping the lower part of the face. It is thought that in this action, the hand probably represents the idea of ending or closing something. It is often applied to signify that something has been completed or finished, most probably refering to the completion of some period of time. It is interesting to know that censers were often used for New Year rituals, which makes it possible that the censer was indeed utilized for this kind of ceremony.

Object incorporated in Belgian collection prior to the 1960’s.
Accompanied by Thermoluminescence test (Archeolabs)