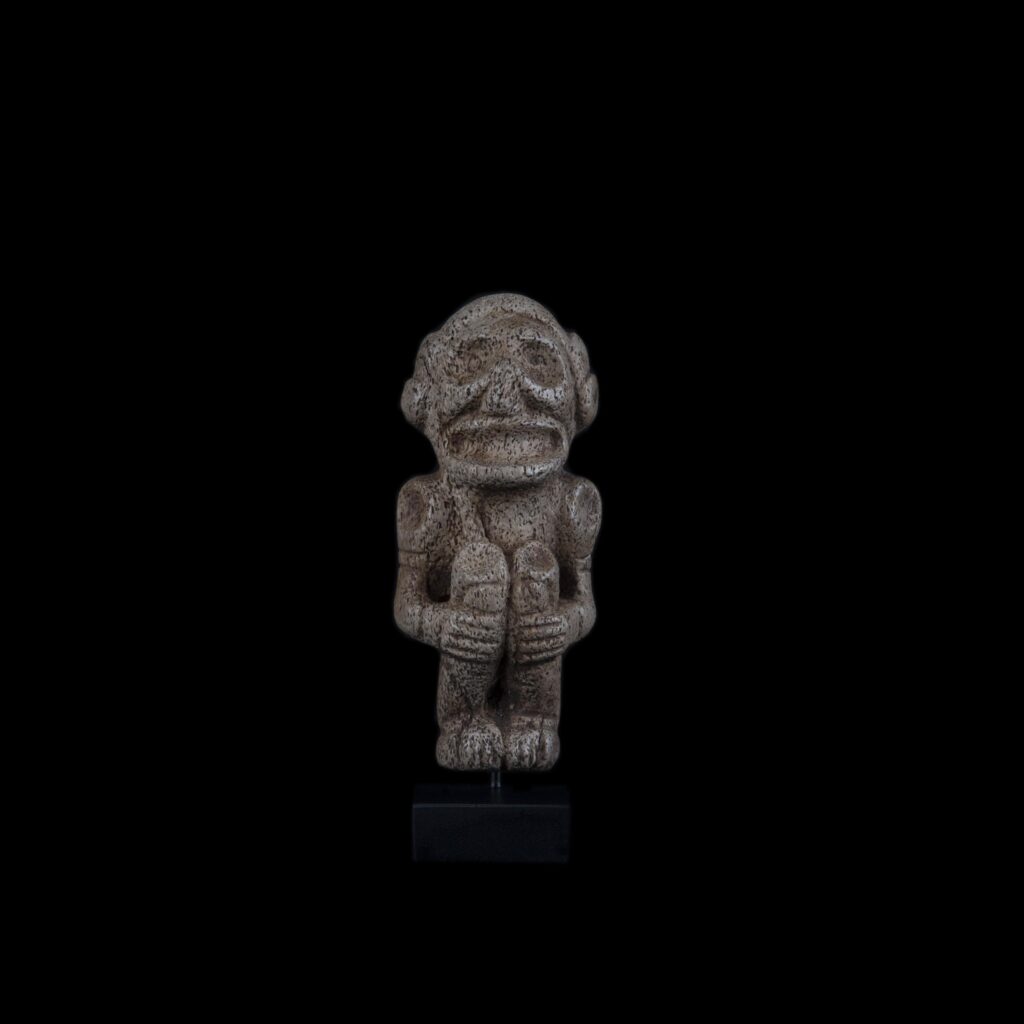 DESCRIPTION/EXPERTISE
Because of their religious importance ceremonial sculptures were the epitome of Taíno art. The Taíno, a complex mosaic of natives cultures inhabiting the islands of the Caribbean and the first indigenous people of the western hemisphere to meet Spanish explorers, were known to wear small pendants like these ones, as they believed the pendants held religious, ancestral or totemic importance.

Although the depiction of animals, such as frogs or owls were a favored subject, Gods and ancestors were the primary source of creative inspiration and were usually carved in human form. Most gods were depicted kneeling in a revenant position or, as in this case sitting or crouching as if they were seated on “Duhos”, which were larger sized seats used by shamans (“Behiques”) to lay on, probably in a fetal position, while inhaling Cohoba during the snuffing ceremony *. These sort of seats were also used by the Taíno chief (“Cacique”) to watch a ball game the Taíno were known to play, very similar to the games played by the Olmecs in Southern Mexico, around 1400 B.C. When seated in this squatting position, they typically face forward, with their hands on the knees.
Gods in human form were depicted often with open mouths, sometimes showing pronounced teeth, skeletal features, like sunken eyes, articulated vertebra and shallow rib cages. Hints at rank could be seen in the various additions of headbands, ear spools and arm- or legbindings. These accoutrements could also be associated with Caciques or Behiques.

The pendant is made of manatee bone. Compared to other Amerindian Cultures, manatee bone is very prevalent in Taíno art, probably due to the fact that besides manatee there were no large animals on the islands, so the large sea creatures were probably one of the most important resources for meat and bone. Besides it’s accessibility, manatee bone is also soft, which makes it a pleasing medium to work with.

* In this ritual the shamans (“Behiques”) of the Taíno inhaled the seeds of the cohobana tree, by use of a pipe, to produce a psychedelic effect in purpose to communicate with deities